On a cold day, in the coldest part of the world, there stood a great crowd of penguins in the snow. They were standing close together not only to keep warm from each other’s body heat, but also because they didn’t want to miss a word of what the Preacher Penguin was saying.

The Preacher Penguin was a local celebrity. But as many local celebrities, he started out as just local and just a penguin. But he had a way of seeing and saying things that caught the attention of other penguins. More and more penguins came to listen to his stories and wisdoms and before you knew it, that couple of penguins grew into a group and the group grew into a crowd and penguins were starting to respectfully call him: The Preacher Penguin.

Today the Preacher Penguin was talking about journeys and the fact that not the destination of the journey is the most important goal, but the journey itself. He was saying that one should enjoy the moment and intensify the now-experience, when suddenly a loud CRACK sounded.

The loud crack was followed by a series of cracking sounds in all directions.

The ice the Preacher Penguin was standing on was breaking loose from the ‘main’ ice. What was a solid piece of rock hard ice moments before, suddenly became a drifting floe, floating into the ocean! Fortunately penguins are good swimmers, but in this case the water was inhabited by 2 hungry polar bears. So the wise Preacher Penguin stayed put on his floe, and drifted away further into the ocean followed by the polar bears…

After a while the Preacher Penguin became tired and – before he knew it – fell asleep. The floe did not but drifted on the strong currents of the ocean leaving the coast, the other penguins and the polar bears behind.

When the penguin woke up, it felt warmer than usual and he felt instantly lonesome as well. Looking around from his tiny floe, the only thing he could see was the blue-grey water of the huge ocean. Fortunately the polar bears were gone but the fish in the water were plentiful, so after a quick dive, dinner was served.

Days went by. The ‘restaurant’ stayed the same but the menu of fish changed from small icy fish to bigger tropical ones. Also the temperature rose while the foe shrunk to a point where it was hardly possible for the penguin to stand straight and keep his balance…

The final disappearance of the foe happened faster than a tip disappearing in a waiter’s pocket and suddenly the Preacher Penguin found himself swimming in a warm but wet ocean. Yet, he wasn’t afraid. He reminded himself of his last speech about the journey and the destination to stay calm. That calmness stood in sharp contrast compared to the joy and enthusiasm that engulfed him when he finally saw a destination in the shape of a golden beach.

After a stiff swim of still a few hours the penguin washed up on the beach where it lay exhausted with his beak in the sand. Suddenly he felt a sharp pain on the top of his head. And another one. When he raised his head, he saw something that he never saw before: a group of brown penguin-likecreatures with long legs and arms throwing nuts at him.

When he got up on his feet and started wiggling towards the group, they burst out laughing! Look at him walking with no feet!

Sad, but happy he survived, he moved on passing the brown creatures, walking into something that looked like a forest. He was thirsty and his tongue felt like an old piece of leather, when he passed a group of pink birds with long legs and necks. They also started to laugh in a twittering kind of way! Look at that! Black and white with wings, but not able to fly!

He wanted to reply, but because of his dry tongue, the only sound he could make was a squeaky kind, making no sense at all and almost every animal in the area started laughing. The great happiness the penguin felt when he washed ashore, was washed away by the most miserable feeling he had ever had in his entire life.

Days went by and the penguin was reminiscing about the time he was still in the coldest part of the world and that gave him a warm feeling. Suddenly he heard a scream. Alerted by his old instincts to help, he moved in the direction of the sound and found a male flamenco and a big egg.

The flamenco was panicking, because the egg was getting cold and his wife was gone fishing. Without hesitation, the penguin took the egg and put it between his legs as he had always done back in the old days and started walking. The flamenco looked surprised and asked where had learn to do that? The penguin explained while he kept walking around with the egg between his legs, until the female flamenco returned and took over.

Another day, another scream sounded through the forest. The penguin got up and wiggled in the direction of the sound, finding a group of monkeys standing on top of the rocks, pointing down at the water.

A young monkey had fallen into the water and was about to drown. The penguin did not hesitate and glided via the rocks into the water. With amazing speed, he raced through the water, grabbing the monkey with his beak just before it went down to the depths forever. He pulled him to the side of the water and heaved him out. 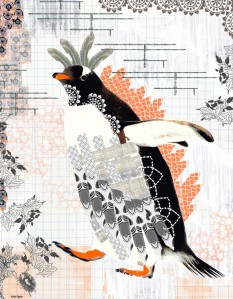 The monkeys stood cheering and dancing and they hugged the penguin complimenting him with his swimming qualities, asking him where he had learned that and so on.

The penguin told them how he had learned that and why it was so important to have an open mind for new things, about friendship and the meaning of life. Slowly the group of monkeys grew and flamingos dropped by and rabbits, pigs, other birds flew in, hedgehogs listened trying to pick up something and even some foxes came to eavesdrop….

Soon a great crowd of animals was listening to the stories and the wisdoms of the penguin and it became a returning event. The penguin felt more comfortable and accepted and more liberated to tell his stories. He opened the minds of the animals and the animals inspired the penguin to share more stories and wisdoms.

The good thing was that he forgot all about his previous life and felt completely accepted in this colorful world. Suddenly he saw himself. A black and white bird that could not fly nor walk properly, and realized he had yet another fascinating story to tell: the story about the brightest colors between black and white. Not long after that story the animals started to call him The Preacher Penguin.

The moral of this story is of course what you make of it, but the intention I had with it was to explain that although you can have many talents and gifts or even just good will, in any new situation it will take time to get noticed and accepted or adapt to it and learn to deal with it. Even growing up creates situations like that.
Don’t panic, stay calm. The best way is to be yourself the best you can, but make sure you interact with the environment, the people and the situation. Sooner or later your talents will be noticed and you will be recognized. Sometimes in a way you didn’t or maybe even couldn’t imagine. The Preacher Penguin is part of the World Of Beast. 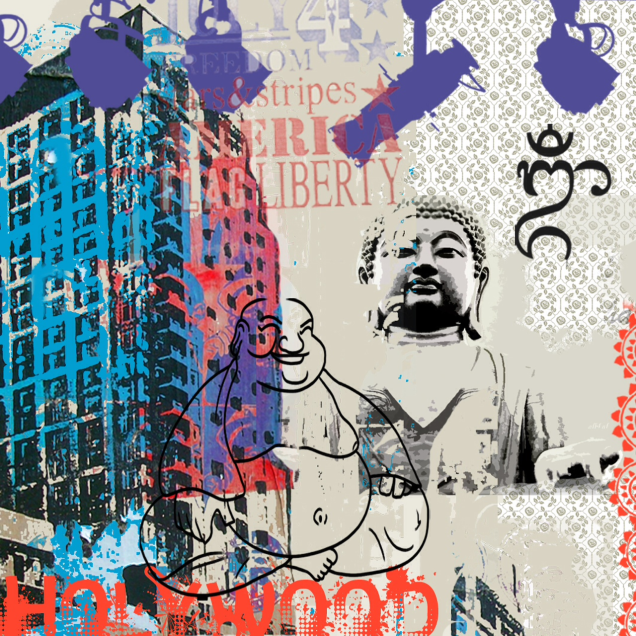 It is good to be superstitious. Why not?

It helps creating a (new) reality and that’s always good. Take a look at the movie “What the Bleep do we know”. I believe it is an incredibly interesting movie about Quantum Physics and how that influences everyone’s life’s. For me that movie was the start of a new way of thinking.

Anyway, superstition.
It is good to have rituals, special ways of thinking or tokens and make sure to believe in them. Even if they’re not giving the outcome you expected of wished for.

Probably there’s a reason it did not happen, because one thing that did not happen, will create the opportunity for another exciting event to pop into existence and that might lead to something really unexpected.

Unexpected. That is the scary part, but imagine this, if everything happened as you planned for, everything will stay the same, unless you’re incredible creative, and even then.

So hold on to (or start) your superstition, your rituals, your special ways of thinking! Open your mind and stay on the path to Holywood!

I was riding my mountain bike and suddenly from the right a small black hairy caterpillar came crawling out of the grass.

In a reflex I was able to avoid crushing it under my wheels. And by not killing that caterpillar, I saved a butterfly.

That
Made
Me
Think.

It’s easy to kill ideas, initiatives or people just trying.
It’s easy to be blunt and inconsiderate, but by doing that you kill any possibility of a good outcome and not leave any room.

It’s better to listen and encourage.
To care and take care.
To love and to cherish.
And you never know, by doing that you might change the world.

Remember that next time you see a butterfly…. 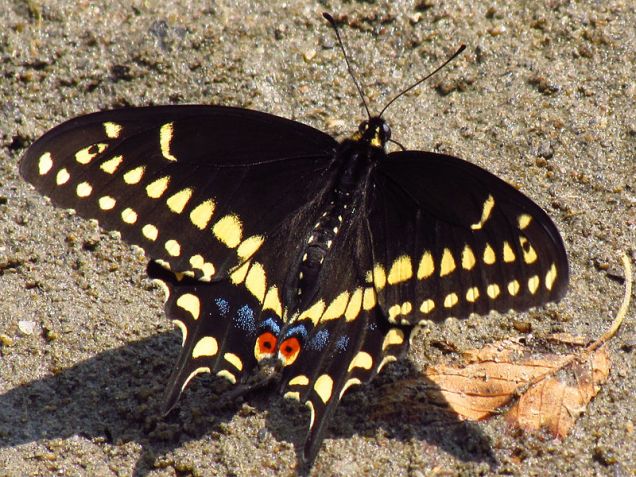 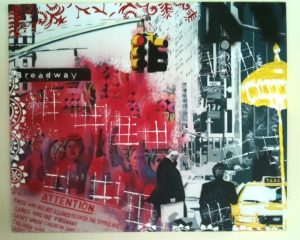 It is easy to fall into the pitfall of narrow-mindedness. I believe it is because we get used to things easily and therefore forget the fortune we have.

Imagine everyday waking up with everything in tact accept your memory of the good fortune and good experiences. That’ll be quite an experience! Suddenly you experience common things, as it was the first time, like:

Breathing fresh air, experiencing the sensational taste of an orange, the coolness of water on a hot day, the heat of a stove on a cold winter day, the sense of an embracement, a kiss on your lips or skin, a glass of water when you’re thirsty, family, friends, silence, the sound of birds, the lapping of water against a sailing boat, ….

Small things of which we’ve grown accustomed to and forget to appreciate. Instead, we (or I, whatever suits) focus on things we don’t have. That creates unnecessary negative energy.

The word jealousy comes to mind and the funny thing is that this word is derived from the Latin word zelosus, (or Greek zelos, ζῆλος) meaning full of zeal, where zeal is defined as: great energy or enthusiasm in pursuit of a cause or an objective.
Also funny is the French explanation: Looking from behind the jaloux (= blinds).

So originally jealous had a positive connotation. Unfortunately, the bible and Shakespeare (he introduced jealousy as the green-eyed monster) put in the negative. I will force myself thinking of it from the positive perspective: Great energy & Enthusiasm in pursuit of a cause or an objective.

Of course we all want bigger houses, more money, more things and that is ok, but look at it differently. The pursuit is more then half the fun, it’s the travel, not the destination. Having it will make us forget it. Like the small blessings.

Of course there are the ‘if / then’s’, but without these ‘if’s’ other great things will and have happened already, we just need to re-focus or better, have a broader perspective, changing from convergent to divergent. Flip the funnel, create air.

I focus on the small and the big things I have (and they are great!). It stimulates me to enjoy them even more and gives energy to pursuit dreams and creating them.