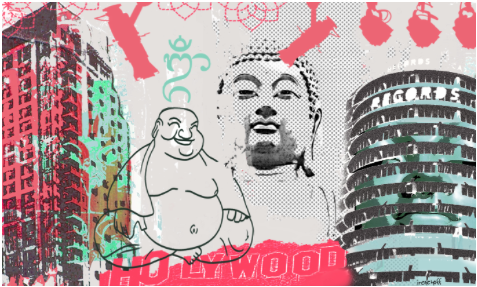 It is an interesting trend: Buddha statues are replacing Jesus. The question is of course whether it will improve the way we experience live. In essence they both preach the same: “Live life consciously” I had to think of a true Zen story that took place two hundred years ago in Japan.

Two Zen masters decided to have a debate on their different styles of teaching. On the day of the debate it was raining. One Zen master was sitting in the floor drinking tea when the other entered the room and sat opposite him. The tea-drinking Zen master said, “On which sided of your shoes did you put your umbrella?” The other Zen master sat still for a while and realized he didn’t know. He immediately gave up being a master and became a pupil of the first Zen master.

By not knowing something as simple as that, he realized he had been thinking about the debate instead of actually being alive. The thing is that the only time you can actually be alive is now. Not in the future, not in the past, but right now. Every time that tiny moment.

It is gone in a blink of the eye.

We worry too much about the future, that we forget about the now. We’re stuck in the past, reliving things that have gone bad, and are to busy to enjoy the.

Future and the past of course, don’t actually exist. They’re concepts in our mind. We don’t live our lives in the world, we live it in our minds and that was what the Zen master realized he was doing. Thinking about something else and while doing that, he wasn’t really alive. Not living in the now and that’s why he decided to become a pupil again to learn to be actually alive all over.

So Buddha or Jesus, the truth of the matter is, it doesn’t really matter. It is about what you do with it. Remind yourself with Jesus or Buddha, a sign on your hand or every smile of a child to be that pupil. Be the observer of your own thoughts (and laugh about hem now and then) and live in the now.

In remembrance of David Bowie, who died at he peak of his being.