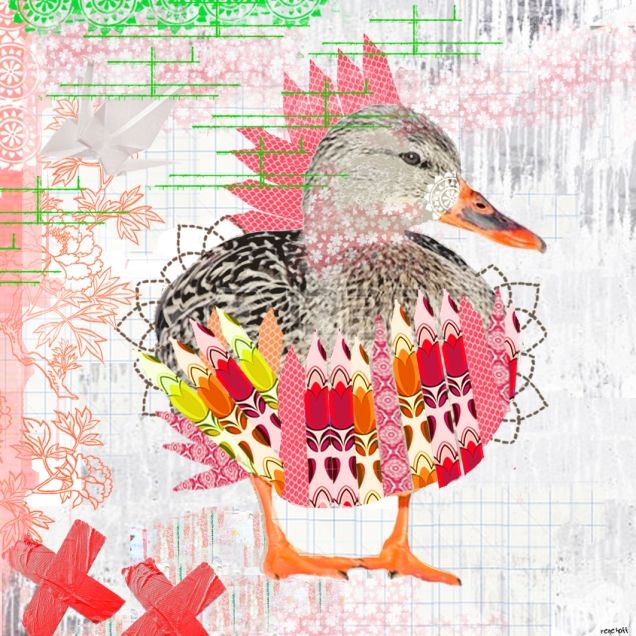 Once upon a time there was a very lazy duck.

The duck was so very lazy, she wouldn’t move. She didn’t bother to, because everything happened by itself anyway.

She didn’t need to swim, because she floated in the water. The wind would blow her in any direction and for her that was fine. There was always something interesting to see and if not, well then she waited until the wind blew her somewhere else.

Food wasn’t a problem either because there was duckweed everywhere. The only thing she needed to do was put her beak in the water and the duckweed would float in.

Occasionally she had a treat, when a beetle or another small insect was lost and wandered its way into her beak. Those were absolute feasts!

Life was good, except for the hunters that came by now and then. And when the other ducks fled or got shot, which happened now and then, the whole duck-community was mourning for days about it.

The lazy duck just stayed put, not moving a centimeter. She had a philosophy about hunters: When you don’t see them, they won’t see you, so she just closed her eyes.

Somehow it worked, because she hadn’t been shot yet. The other ducks started to call her Lucky. Lucky the Duck.

Then the pond froze and while the other ducks kept moving around to keep the water from freezing, Lucky the Duck didn’t move. Slowly the ice froze around her and she was stuck in the ice and that was the first time she got scared.

She quacked and quacked until the other ducks came and picked the ice away around her body, so she was free again!

She decided to change her life and stay with the other ducks, who kept swimming to keep the ice open. But because the other ducks did the moving anyway, Lucky quickly fell back into her old pattern of being lazy and not moving.

Winter became spring, and spring became summer and life went on as always until one day the hunters came. Lucky sat where she sat and closed her eyes. She was sure she would not be seen by the hunters….

This time Lucky wasn’t so lucky, she got hit!

Small bullets penetrated her feathers and into her body and that really hurt! Fortunately it wasn’t too severe, just very painful. In shock she opened her eyes and saw the hunter right in front of her.

Now because she hadn’t swam for all these years, she not only had become a fat duck, she also forgot how to paddle her feet. Motionless she was floating in the water. She could see the hunter right in the eyes and it was terrifying. The hunter reloaded his shotgun,and aimed at the duck.

Under water she heard the bang of the shotgun from a distance and saw the small bullets entering the water, just missing her by centimeters.

When she came back up to the surface, the hunter was reloading the gun again and Lucky felt a strange electric sensation in her head, right where she believed her brain was.

The fact is, she got away with just a few broken feathers and some scratches. The only thing that was hurt was her ego. Right then and there, she decided never to be lazy again.

The moral of this story of course is that it is important to keep moving: physically but also mentally. Stay in shape and be open to learn new things. Without moving we forget our potential and possibilities.

We won’t be prepared for any ‘danger’ crossing our path, but neither will we be ready for an opportunity, sometimes simply because we don’t recognize it.

And Lucky? Well, she changed her name to happy and became one of the best swimmers in the pond.

Lucky the lazy duck is a fable and part of the World of Beast. 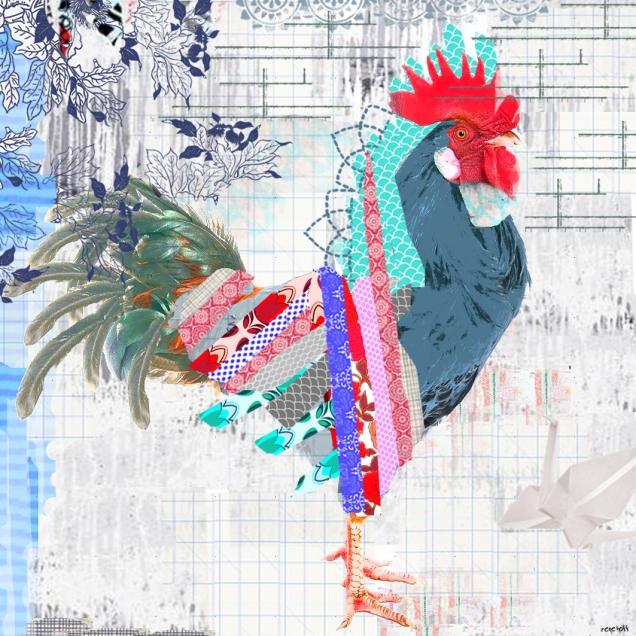 Once upon a time there was a rooster who found himself to be the best looking rooster in the world. In fact he liked to think of himself as a roostar.

Not only did he admire his cockscomb, the colours and shine of his feathers, but he also loved his voice. His ‘cock-a-doodle-doo’ was the best sounding cock-a-doodle-doo ever.

He knew how to pronounce in it in English, but also mastered the French ‘cocorico’, the Dutch ‘kukeleku’ and the German sound of a rooster ‘kikeriki’.

The rooster lived in a coop with exactly eighteen hens. Eight of the hens were in love with the handsome rooster.and ten were not. As a result only the eggs of the first eight were fertilized and the others weren’t.

The rooster wasn’t happy with this. He was happy with his offspring, but wanted more. He did not understand why the other ten hens were not attracted to him.

One day after doing one of the best sounding cock-a-doodle-doo’s ever, he went to the pond and watched his reflection in the water. Still bothered with the ten hens that weren’t in love with him, he decided he needed to become even more beautiful. And better sounding.

Then he started working on his appearance using pieces of cloth and paint and even tape. He brushed his comb by rubbing it in the damp grass, making it shinier than ever before.

After that he went back to the pond and was very satisfied. He decided to stride back to the chicken coop, making all his sounds, convinced all hens would fall for him immediately.

Well, three of them did. They were literally shocked to death. The other 15 were so nauseated by his appearance and sounds they ran away, never to return.

As it happened to be, 2 farms down the road, a very ugly rooster lived with no hens. His eyes almost popped out of his head when he saw the procession of 15 hens and he almost fainted when they asked if they could stay.

And the roostar? Well, he took a ‘sabbatical’, now works in a circus and is actually very happy.

The moral of course is that it is better to stay who you are and be happy with what you have.
The problem often is that because you are who you are, and know what you know, and do what you do, you can become either bored or under-(or not)-appreciated by yourself.

We’re somehow ‘programmed’ to constantly aspire change and forget to reflect on what we have and appreciate it or rediscover things we already had, but forgot. That way we can start to re-appreciate. Anyway, dressing up to look even better is bound for an over-the-top-statement.

So re-appreciate, or go work in a circus. That is all I have to say about it.

Rooster is part of the World of Beast-series and a fable.